Damon Jesse “Rocky” Gause was born June 17, 1915 in Ft. Valley, and grew up in Winder, Georgia. He learned to fly airplanes at an early age and fell in love with flying. He was sent to the Philippines in November 1941 as part of a build-up of troops and materiel preparing to defend the islands against a probable Japanese attack. That attack came on 8 December in the Philippines, but only hours after the attack on Peril Harbor, on the other side of the International Date Line. The planes Gause and other airmen were to fly, never arrived and Gause, like so many jobless airmen, was assigned as an ad hoc infantrymen.

Gause endured the months of hunger and hardship on Bataan. When the Fil-American forces were surrendered, Gause decided to do otherwise. 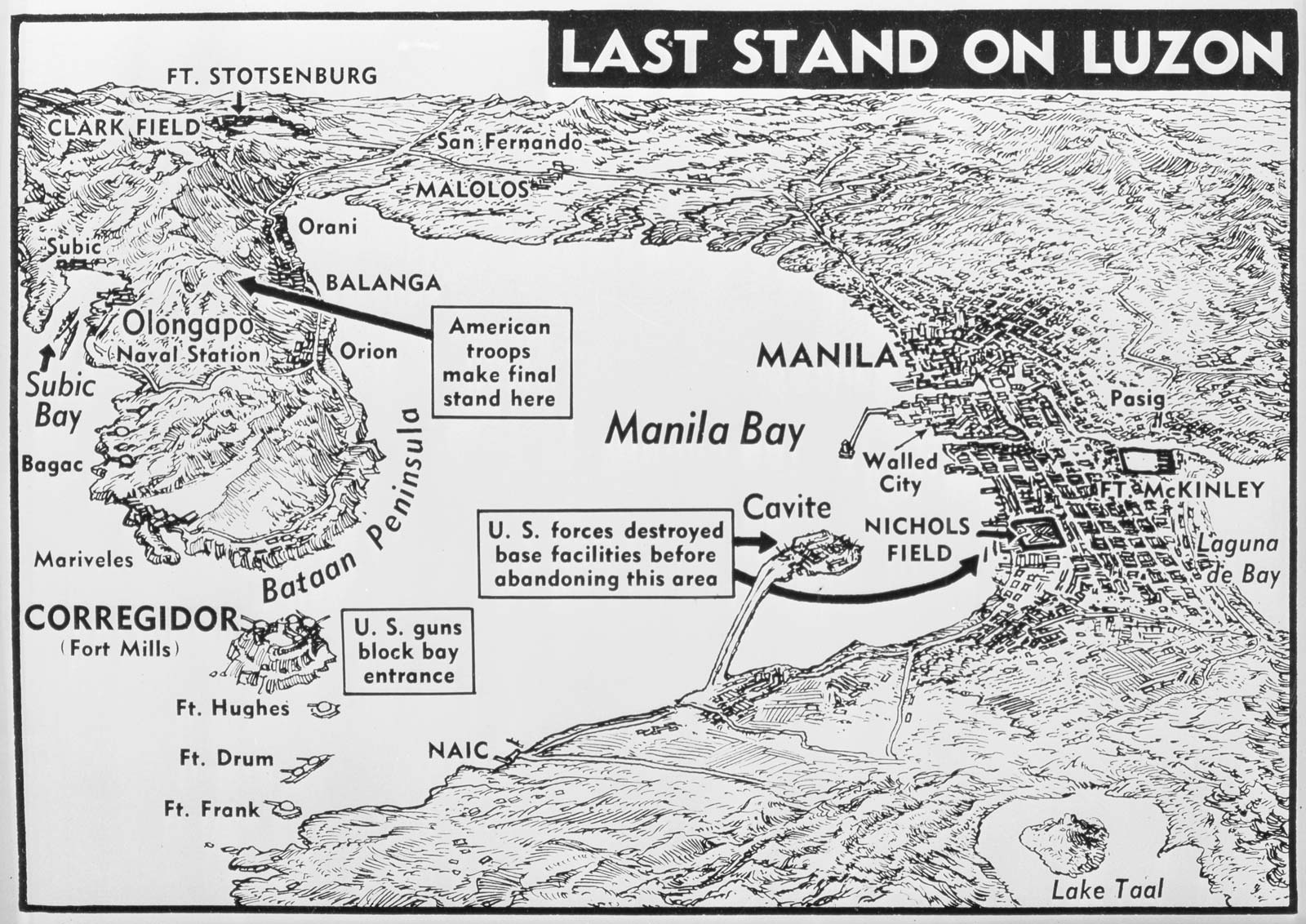 After escaping by killing a Japanese guard with his own knife, Gause swam until he found a life raft on an abandoned steamer. Before he reached Corregidor Island, approximately three miles off Bataan Peninsula, his boat was strafed by a Japanese plane and he was forced to swim the last leg to shore. The sun was just setting when he touched land on April 11, 1942.

After the Japanese overwhelmed the defenders of Corregidor on May 5, the following day Lieutenant General Jonathan Mayhew Wainwright IV surrendered all American forces in the Philippine Islands. Again, Gause decided not to follow the surrender order. He and two Filipino soldiers located a boat and under the cover of darkness left Corregidor for Luzon proper. After their boat was sunk, they completed their escape with another swim. Gause had lost contact with his one surviving Filipino companion. He fell asleep from exhaustion as soon as he reached land. He was awaken the following day by a Japanese soldier’s kick but managed to feint being just another washed-up-on-shore American corpse. Living off bird eggs as he stumbled through the jungle, Gause gave up to exhausted just as he encountered an eleven-year-old Filipino boy. It was one of many such moments he would owe his life and freedom to Filipino citizens.

Captain William “Lloyd” Osborne Jr. was born in Prescott, Arizona on December 13, 1913. He grew up in California. Osborne was stationed at Fort Ord, California with the 7th Infantry Division in September 1941 when he too received orders sending him to the Philippines. Osborne took command of the 2nd Battalion, 51st Infantry, Philippine Army (a unit of Filipino reservists). After Major general Edward Postell King Jr. surrendered the Fil-American forces on Bataan, Osborne and some of his Filipino soldiers located a boat and began a series of movements to evade capture.

Osborne was gradually separated from his comrades in arms but was well cared for and protected by the native people. He was moved to a secluded hut near Taal Lake and for a time was even set up as a small farmer caring for chickens and pigs. Sometime during his stay, Osborne received a handwritten note from a man he did not know, by the name of Damon Gause. Gause requested a meeting with Osborne but the latter was reluctant to agree, feeling it might be a Japanese trap set to draw him out in the open.

Gause was rumored to be living on Mindoro. In July 1942, Osborne finally set off to locate him. Gause had been determined to find a boat capable of sailing to Australia, where he believed an Allied army was forming, if it had not been conquered by Japan. Both men were at best amateur sailors. The journey seemed suicidal and nearly everyone they confided in thought the idea as such. First, it was a trip of more than three-thousand miles through enemy infested waters. Secondly, frequent storms and typhoons raged that time of year and even native fishermen experienced in the waters off the many Philippine Islands did not venture out during that season. Last but not least, the only boat they could purchase was a beached derelict with an iffy engine that worked sporadically.

Osborne placed their departure at four in the afternoon on August 14, from Santa Cruz, Mindoro. They christened their boat Ruth-Lee, in honor of their wives. It was about twenty-two feet long and the sad excuse for a motor was complemented by homemade sails.

Fifty-two days later, Gause and Osborne located land they believed to be Australia. They had in fact succeeded in their quest for freedom. One must believe that other’s thought of and attempted the same escape but were not as lucky as Gause and Osborne. Lost at sea or killed by enemy encounter, their names are forever known only to God.

The President of the United States of America, authorized by Act of Congress July 9, 1918, takes pleasure in presenting the Distinguished Service Cross to First Lieutenant (Air Corps) Damon Jesse Gause (ASN: 0-421599), United States Army Air Forces, for extraordinary heroism in connection with military operations against an armed enemy, in action against enemy forces in the Philippine Islands following the surrender at Bataan. Lieutenant Gause escaped captivity and together with Army Captain William Osborne and, during the period 9 April to 11 October 1942, located a 22-foot sailboat with a diesel engine and tattered sails. With no charts or navigation equipment, and little fuel, the two men sailed south in the ship they named “Ruth-Lee” after their wives. Continuing south, while evading enemy patrols and despite one strafing run by an enemy aircraft, the two men neared Australia where they were picked up and rescued. The personal courage and zealous devotion to duty displayed by First Lieutenant Gause during this period have upheld the highest traditions of the military service and reflect great credit upon himself, the Far East Air Force, and the United States Army Air Forces.

Major Gause was assigned to the 365th Fighter Group on his return to duty. On March 9, 1944, Gause was killed in a non-combat related crash. He was buried at: Plot F Row 3 Grave 85 Cambridge American Cemetery Cambridge, England. 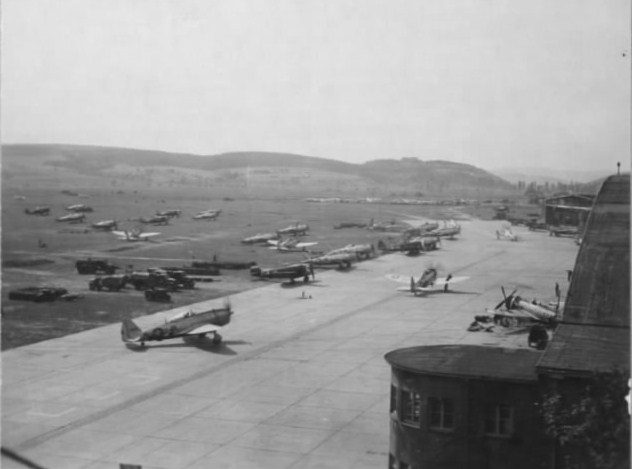 Osborne’s account of their activities after first meeting and partnering with Gause differ considerably from Gause’s Journal. One factor may be that Gause’s version was printed in November 1942, shortly after their successful landing in Australia. Osborne did not publish his story until decades later. Age and time certainly played a role in details and what events he saw as important or unimportant in the telling. There may have been other factors. Gause had to regulate what facts and fictions he told, there was a war on and many people who had helped them escape were still somewhere behind enemy lines. Names and places may have been changed. For example, the “crazy colonel” is included in both men’s stories but he bears a different name, and in Gause’s he receives a terrible demise even. It is also evident that the men bore quite different personalities and what one saw as important the other probably found mundane and not worth mentioning.

The President of the United States takes pleasure in presenting the Distinguished Service Cross to William Lloyd Osborne, Captain (Infantry), U.S. Army, for extraordinary heroism in connection with military operations against an armed enemy, during the period 9 April through 11 October 1942, in the Philippine Islands following the surrender at Bataan. Captain William Osborne and escaped American POW Lieutenant Damon Gause, located a 22-foot sailboat with a diesel engine and tattered sails. With no charts or navigation equipment, and little fuel, the two men sailed south in the ship they named “Ruth-Lee” after their wives. Continuing south, while evading enemy patrols and despite one strafing run by an enemy aircraft, the two men neared Australia where they were picked up and rescued. Captain Osborne’s intrepid actions, personal bravery and zealous devotion to duty exemplify the highest traditions of the military forces of the United States and reflect great credit upon himself and the United States Army.
Headquarters, South West Pacific Area, General Orders No. 44 (1942)
Home Town: Kings County, New York

Lt. Col. William Osborne had a distinguished military career after his history-making escape. He joined the famous 5307th Composite Unit (Provisional) better known as [Brig. Gen. Frank] Merrill’s Marauders, officially formed on January 1, 1944. Osborne commanded the 1st Battalion, consisting of the Red and White Combat Teams. Each battalion was divided into two combat teams. The Marauders succeeded in completing American forces’ first long range penetration behind Japanese held lines in Burma. The 3,000-man 5307th was supported by 300 mules and 80 muleskinners of the 31st Quartermaster Pack Troop, the unsung heroes of the mission.

In the jungles of Burma: from left to right Capt. Tom Senff, Col. Charles Hunter and Lt. Col. William Osborne.

COL William Osborne is inducted into the Ranger Hall of Fame for outstanding service as a Ranger Officer. COL Osborne’s Army career is a sage of quiet heroism in combat and unswerving devotion to his country. Cadet Captain and ROTC Honor Graduate from UCLA in 1936. Commissioned in 1940 in the Regular Army as 2nd lieutenant in the 7th Inf. Div Ft Ord, CA on Sept 1, 1941. He was sent to Luzon as a Company Commander of a Philippine Scout Company. On Dec 7, 1941 at the outbreak of WWII he was given command of the 2nd Battalion, 51st INF Philippine Army, a unit of the Philippine Reserves called to active duty. Bataan surrendered April 9, 1941. Knowing it to be certain death if later captured, he and 3 of his surviving men, not wanting to be a Japanese POW, played cat and jungle mouse with the Japanese for weeks, working their way through the jungle, toward the beach. Hidden in a Nipa Hut for the next 2 months by Philippine partisans, he linked up with an AF pilot, LT Damon Guase, who had soldiered until the fall of Corregidor as an infantryman. He located an old 22 foot sailboat with a one cylinder engine. With a National Geographic map and an Army field compass as navigational instruments, they set sail for Wyndham, Australia. After a 3000 mile hazardous journey through Japanese patrolled open seas, buffeted by storms and a typhoon, and strafed by enemy planes and patrol boats, they reached there destination. They were both awarded the Distinguished Service Cross by General Douglass Macarthur personally for their exploits and logging detailed notes of Japanese troop dispositions, enemy shipping, names of service men who had not surrendered, including their serial numbers, and the state of Philippine morale. COL Osborne then volunteered, at the request of President Roosevelt, for a “dangerous and hazardous unknown mission” with Merrill’s Marauders, where he was Commander of the First Battalion Red and White combat teams. He distinguished himself with his leadership during the long campaign behind enemy lines, leading to the capture of the airfield and City of Myitkyina.

Osborne passed away in 1985. He had served his country honorably through three wars. He was buried in the Monterey City Cemetery, Monterey, California.

By November 1942 every newspaper in the country was publishing the Gause/Osborne story. Included here is the St. Louis Post-Dispatch’s editions: https://www.newspapers.com/browse/us/missouri/st-louis/st-louis-post-dispatch_4064