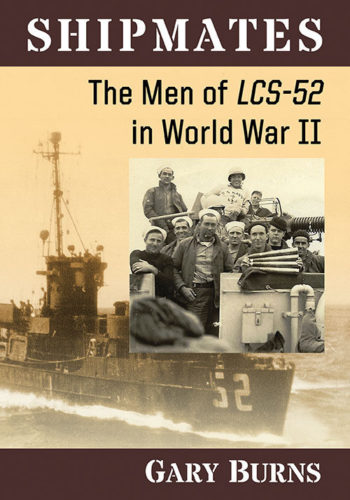 In the late months of 1944, seventy-one men climbed aboard a runt of a ship only one-hundred-fifty feet long and twenty-three feet wide, and headed toward the sound of gunfire. The ship carried an arsenal of weapons equal to those of ships twice its height and weight. Its shallow draft made it capable of maneuvering to within a few feet of any Pacific island beach. It was unique to all other crafts and earned its title of “gunboat” and fell in among the ranks of its sisters known as “Mighty Midgets.” To the U.S. marines and soldiers landing on Japanese held islands in that final year of World War II, it became a guardian angel.

Packed tight within the bulkheads of the tiny craft was a crew of men, diverse and contrasting, who would, over the course of the next several months, become as close as brothers. They came from every occupation: farmers, students, wagon loaders, cooks, teachers, and many more. They ranged from the very young at seventeen to the very noticeable middle-agers. They were black, white and brown; first-generation Americans and grandsons of western pioneers. A few had already seen combat in the Atlantic and the Pacific, while some only knew violence from watching a calf being born.  But the ship made them all the same; she treated them with total disregard for their indiscretions, their flaws, their color and their religions. She kept them alive and they reciprocated by protecting her to their last breath.

When the war finally ended and their mission was complete, they, the crew of Landing Craft Support 52 would hold her and their shipmates forever dear within their hearts and souls. They would carry with them the scars of war and most would see the day when the old 52 would go to the bottom without them. One by one they, like all the veterans of that war, would pass into distant history; most would never bear the pain of telling their war stories. The only reminders left to us of their courage and selfless sacrifice: weathered photos of men posing at their ominous guns, and drunken sailors on conquered beaches. Their smiles are sometimes lying and their eyes sometimes too truthful for those who have never met great fear or held a dying friend. It is from these cracked and saffron-colored photos that the foundation for building the story of LCS 52 and her crew began.

Shipmates is the story of those brave men who served their country aboard a little known naval vessel during World War II, and it is the story of survivors who returned and built lives and families. They should never be forgotten though they are no longer here to give their own account.

“the author does a fine job of illustrating the ship’s service and combat record…. Combining elements of military and social histories, Burns expertly weaves together a web of short, intermingling biographies of the men of LCS 52. The inclusion of high-resolution images including official navy photographs and personal snapshots acquired from a crew member’s private camera helps readers better visualize the well-armed gunboat on which much of the story takes place. World War II history buffs and those interested in twentieth-century military, social, and cultural history will find Burn’s work to be a comprehensive and satisfying read. The author has effectively immortalized the memories of LCS 52 and its fighting crew forever”–H-Net Reviews.