Camp Fannin was a WWII U.S. Army training camp dedicated to providing basic training for infantry replacements desperately needed in the later years of the war. Camp Fannin opened in March 1943 as the U.S. Army Infantry Replacement Training Center. The name honored Colonel James Walker Fannin, who commanded the doomed garrison at Goliad during the Texas Revolution. Camp Fannin sat on more than 14,000 acres ten miles northeast of the town of Tyler.  An estimated 200,000 recruits were trained and sent overseas in the period between the camp’s inception and 1945. The camp also interned German prisoners of war (POW) taken at various stages of the hostilities. Camp Fannin was closed in 1946 and little remains as evidence of its daunting accomplishment during the war except historical markers and a few overgrown building fountains.  The Handbook of Information was purchased by the author as a souvenir for his father, who was trained at Camp Fannin and subsequently shipped overseas to the Pacific Theater. 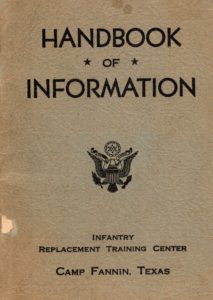 [Click on above link; link opens in new window.]